Companies like GoDaddy evolve role of CRE and facilities management 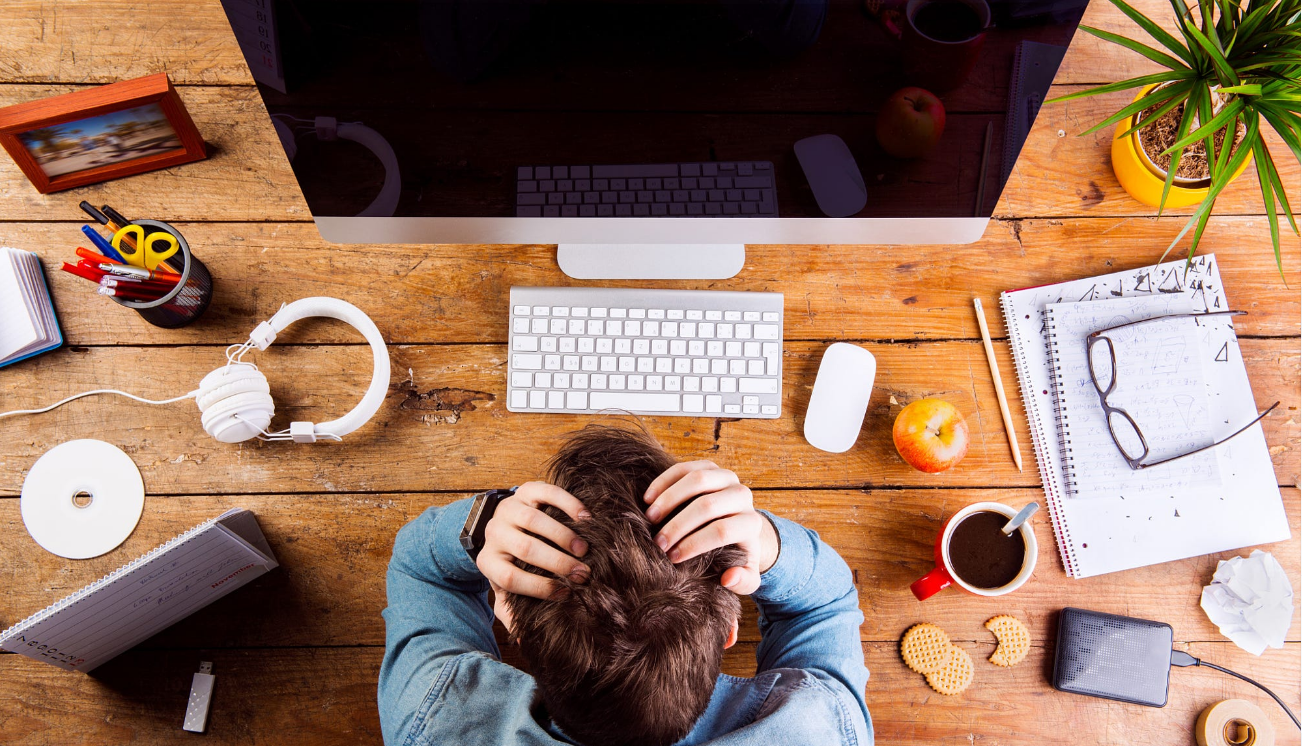 The workplace is killing Americans.

While that may seem overly dramatic, anyone who’s ever been stuck in an unhealthy work environment is unlikely to disagree.

If you ask Rex Miller, worse still, companies aren’t doing enough to improve the health of their employees, instead continuing to rely on wellness programs… an approach he believes is outdated and ineffective.

“We need to recognize they just don’t work,” the author and Principal of mindSHIFT, said bluntly. “It’s this dirty little secret. We go through these routines and we play the game and we gain the numbers for these wellness programs every year, but the bottom line is they’re not reducing costs and they’re not improving health outcomes.”

While his comments may seem harsh, they’re well warranted. Work is now considered the fifth leading cause of death in the United States, above diabetes and Alzheimer’s, as well as being a well-known aggravator of chronic disease and unhealthy behavior.

“We’ve got the causal link reversed. If you look at the root cause of things like smoking, unhealthy eating, alcohol and drug abuse, and sedentary lifestyles, it’s stress. We have to deal with what causes so much stress in the workplace as opposed to the symptoms.”

The Need for a Paradigm Shift

Though getting most companies to understand employee stress is a problem that requires their urgent attention, and alternative solutions, remains an issue.

“Corporate executives still don’t fully understand what it’s costing them, as well as the future threat it poses,” Miller said. “In 10 years, health costs will double for corporations. It’s a problem that’s rising faster than their profits.”

Already, it’s estimated workplace-related stress costs the American economy around $300 billion a year. Despite this, after eight years of research, Miller believes roughly 80 percent of companies still see employee health and wellness as merely a cost or risk to be managed.

“Based on what we’re seeing in adoption and understanding, another 15 percent of companies are looking at tackling the issue as a way of attracting and retaining good talent. There’s also a rarer category of organizations, about five percent, that looks at health and wellness as a human right or a value or just part of what they do,” Miller said.

“In 10 years, health costs will double for corporations.”

It’s this latter contingent of forward-thinking organizations, especially, that is turning its attention to solutions in corporate real estate and space design to eliminate workplace stress. Creating “healthier physical environments that affect 100 percent of your employees,” Miller said, is far more effective than relying on them to opt-in to healthy eating challenges, anti-smoking campaigns, and yoga classes to achieve real outcomes.

Workplace Design to the Rescue

Optimizing work environments for physical and emotional health outcomes has so far proved extremely effective for those making the investment, though Miller admits it requires a significant shift in mindset.

In particular, this involves executive leadership recognizing the potential of the building itself to play an active role in helping employees adopt healthier habits through the use of integrated “change architecture.”

Design also plays a significant part in decreasing stress. If navigating a facility is difficult or confusing for employees, it’s going to have a detrimental effect on their state of mind. Striving for what Miller calls legible spaces that are “intuitive and logical” to get around helps eliminate unnecessary friction in someone’s day.

Additionally, Miller referred to a whole host of basic building features that dramatically improve the experience of being in the office. Circadian lighting, proper levels of oxygen, recovery spaces, and integrating design that encourages movement are all simple measures companies should be striving for when embarking on a project.

“We’ve seen that the price bump to do all of that is less than one percent over a traditional construction project, if you bring people in early and do it right,” Miller said. “We’ve learned a lot from the green movement about how to build high performing sustainable buildings. We’re now just tying those lessons in with human sustainability. It’s not a big leap.”

One company in particular that Miller draws upon as a positive example is internet domain registrar and web hosting company GoDaddy.

Undertaking a major upgrade to its Tempe, AZ HQ in 2014, the company focused heavily on ways employee health and happiness could thrive. In doing so, GoDaddy’s workplace development team looked to hotel design for inspiration.

“If you think about your building, what matters most is the human capital coming in and out of your doors every single day.”

Specifically, they broke down the workplace into a series of touchpoints, much in the same way a Ritz Carlton or Four Seasons might map out the guest experience. The parking lot, for example, is a separate touchpoint, as are the reception and elevator areas. GoDaddy then evaluates each touchpoint as either a friction point, neutral point, or positive point, allowing the company to methodically improve each component.

“If you think about your building, what matters most is the human capital coming in and out of your doors every single day,” Calvin Crowder said. GoDaddy’s VP, Global Real Estate and Workplace explained: “understanding that, we erased the board and really thought about ways we could ensure our employees are having an amazing experience and that they want to come into work the next day.” 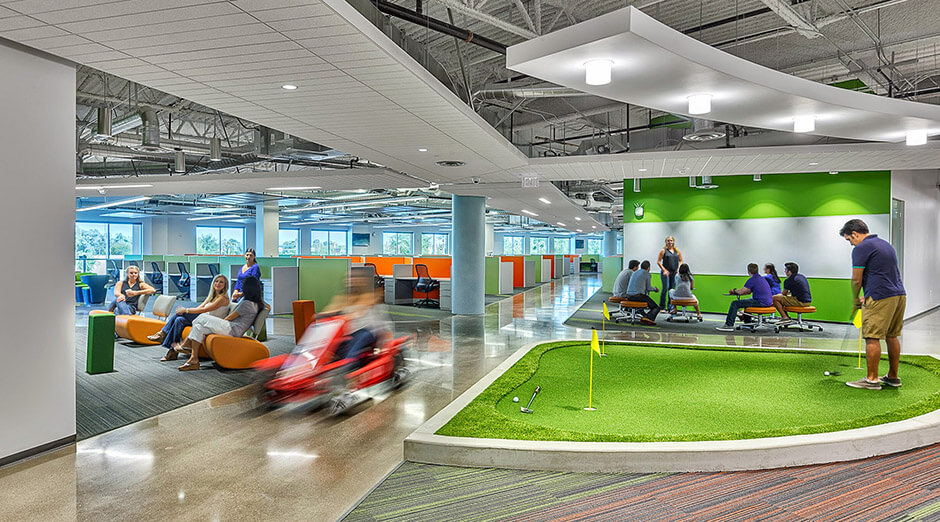 This approach also led to the creation of an experience manager position, in partnership with facility services provider, ISS. Much in the same way hotel staff exist to enhance the guest experience, GoDaddy transformed the role of its facilities management team to oversee not only the building, but also its workforce. For instance, if an experience manager walking down a hallway recognizes someone walking in the opposite direction is stressed, they’re trained to then provide necessary support and resources.

“If you look at the best hotels around, they don’t just build a great hotel. They wrap it in great service. That’s my approach to facilities,” Crowder said. “We’re proud to have piloted the experience manager role here in Tempe, which has blossomed to the point that ISS has since grown it into a global program.”

Collaboration for a Healthier Culture

Though for Crowder, GoDaddy’s biggest contribution to employee well-being is the way it used the physical workplace to drive a radical transformation of its company culture.

Originally an IT manager, Crowder was an unlikely eleventh-hour addition to the team rolling out GoDaddy’s Global Technology Center upgrade. When CEO, Blake Irving, was unhappy with the proposed designs, he tasked Crowder with devising a different strategy.

“The initial plans for the building were very bland and straightforward,” Crowder said. “There weren’t a whole lot of amenities and the buildings certainly wouldn’t have represented our values or our mission. We definitely made a concerted effort to make sure our employees are living passionately and working fearlessly.”

Working with the project’s architects non-stop over a two week period, Crowder added in sand volleyball and basketball courts, a skatepark, as well as yoga and fitness studios. But GoDaddy knew it wasn’t enough to merely build the amenities. In order to encourage employee buy-in and instil an active and social company culture, the workplace development team has collaborated closely with other departments to establish employee-driven groups that organize sporting leagues and activities.

“You can build these beautiful buildings that attract good people, but if you’ve given little consideration to your employee experience offering as a whole, you won’t be successful,” Crowder said. “Those grassroots employee-led efforts are the best way of getting people involved.” 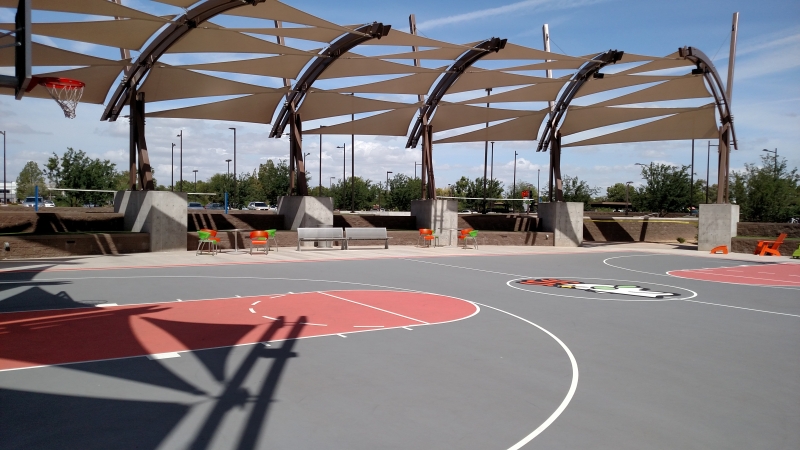 The potential of workplace design to dramatically improve the health of the population cannot be overstated. However, in order for the corporate real estate community to take on this pivotal role, Miller prophesied the nature of the industry will have to evolve significantly.

"We can’t just deny that the things happening in our employees' lives don’t have an impact on the way they work."

“In the next five years, factors like improving science and tech, as well as changing societal standards and expectations, are going to converge and we’re going to need new kinds of corporate real estate and facilities leaders,” he said. “They’ll have to be trained in health and need to understand the body and physiology and cognitive performance. It will be about both building and human performance professions, not just a focus on the building.”

For such a widespread paradigm shift to take place, progressive companies will need to lead the charge. Without a true commitment from leaders who genuinely treat the lives of workers as their responsibility, rather than just an opportunity for good PR, work-related stress and its associated costs will continue to balloon to a dangerous degree.

“It’s important for employers to recognize how big an issue this is today, and will be in the future,” Crowder said. “Life is life. It’s a crazy journey through mortality and things come up. As leaders and employers, we can’t just deny that the things happening in our employees' lives don’t have an impact on the way they work, and their productivity in general, because they do.”

Rex Miller and Calvin Crowder will be speakers at the inaugural WorkSpaces retreat, happening October 27-29 in Palm Springs. Join us!